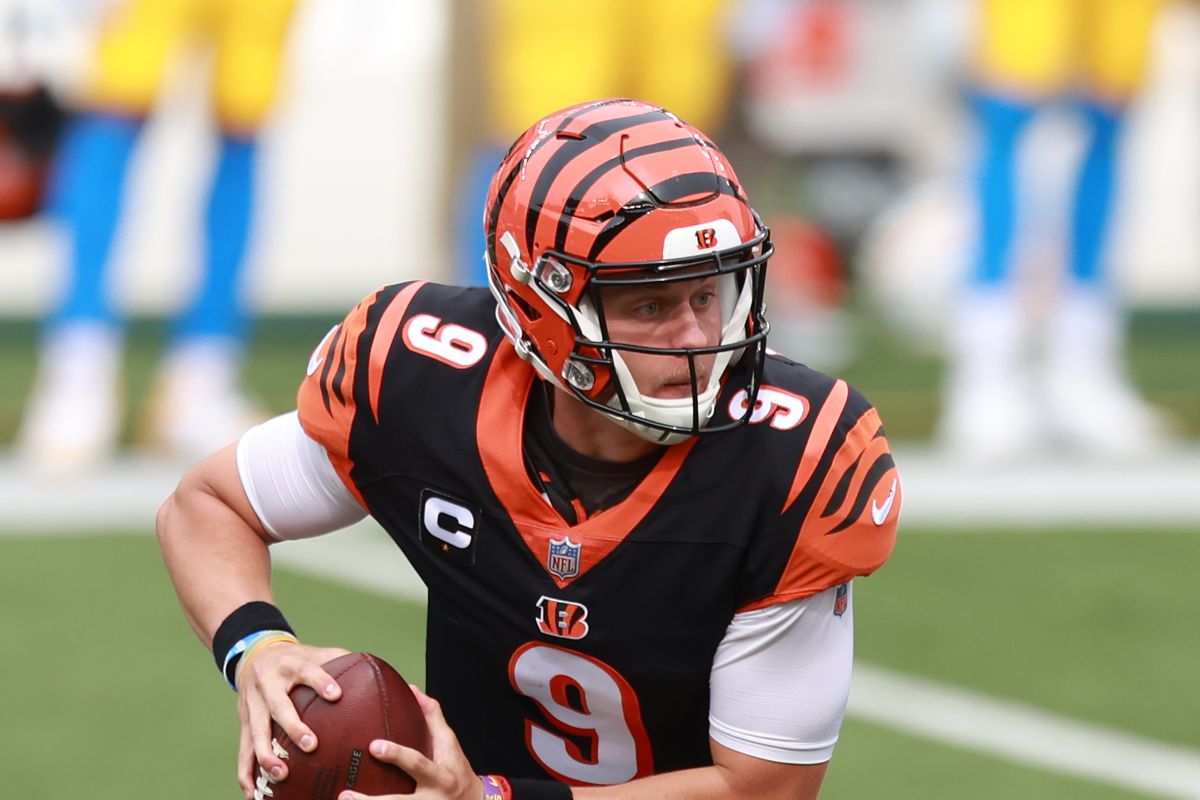 The Bengals did what was expected in selecting Joe Burrow with the #1 overall pick. Burrow should fit in right away with weapons in A.J. Green, Tyler Boyd, and John Ross at the WR spots and a healthy O-line. For now, he has veteran QB Andy Dalton to lean on for guidance or give him time until he’s ready.

The Redskins also did what was expected at the #2 pick, selecting Chase Young #2 overall. Young was considered the best defensive prospect in the draft and should fit in nicely on a defensive line with DT’s Da’Ron Payne and Jonathan Allen in place. Ron Rivera will be the perfect teacher to get him ready.

The Lions did as most people expected selecting Jeff Okudah #3 overall. Okudah should fill in nicely on the other side of free agent pickup Desmond Trufant giving them two CBs with good size and coverage skills. The Okudah selection saves the Lions from the fallout with CB Darius Slay, in a positive way.

The Giants chose to do what they did last year by selecting their guy even if it was way earlier than expected. Andrew Thomas was graded more as a mid-1st round selection after scouts had a chance to really evaluate him, but he does have the skills to be their long-term LT.

The Dolphins got their guy and didn’t have to move up for him selecting Tua #5 overall. Tua should be a nice addition to the team once healthy as the team continues to add talent via the draft and free agency. Tua will be able to sit behind both Fitzpatrick and Rosen, until fully ready in this ideal situation.

Like the Dolphins the Chargers got their guy, possibly, and didn’t have to move up to get him, selecting Herbert #6 overall. I thought this was an ideal fit, as well, as Tyrod Taylor has been used to warming the seat for Baker Mayfield and E.J. Manuel. However, slight grade knock as Herbert wasn’t rated this high.

The Panthers were able to land arguably a top 2 player in the draft, due to the need at the QB position by other teams, selecting Derrick Brown #7 overall. Brown is one of the strongest players in the draft and instantly fills at need in the interior O-line and a run defense in need.

The Cardinals like the Panthers were able to benefit from the QB rush, as well as, the Giants slipup, selecting Isaiah Simmons. Simmons will be able to be used in multiple ways in this defense as they have talent at each level on the back end, it will be interesting to see exactly how he will be used.

The Jaguars decided to fill the need at the CB spot which was more pressing when you think about it than the DT position that I expected them to fill by selecting C.J. Henderson. The Jaguars traded both starters at CB in Jalen Ramsey and A.J. Bouye, so the #2 CB Henderson gives them a fresh start.

The Browns did what was expected selecting a Tackle in the 1stround and they were able to draft, in my opinion, the best Tackle in the draft in Wills. However, the Browns signed Jack Conklin to be their RT which would likely move Wills to the left side where he hasn’t played, but he has the talent to do so.

The Jets did what some people expected by giving Sam Darnold more protection up front by selecting Mekhi Becton. However, all of the WRs were still on the board and Breshard Perriman stands as the top target. Becton is a big boom or bust prospect with his size which could lead to weight concerns, but he has high potential to be a mammoth LT.

The Raiders also had the pick of any WR in the draft and decided to go with WR Henry Ruggs with the #12 pick. Ruggs is an absolute speedster who can go deep, as well as, make players miss in space. The Raiders have other WR’s in place, so they didn’t necessarily need a #1, making this a good fit to move him around to create matchup problems.

The Buccaneers shockingly moved up a pick to get their guy, who most people expected to be off the board in Tristan Wirfs. Wirfs can lineup at any spot on the O-line, although he will likely be tried at RT. The Bucs filled a need upgrading the protection up front for Tom Brady.

The 49ers were not only able to land a replacement for the guy they traded away with the pick they received, but they also were able to use it to trade down another spot. Selecting Jevon Kinlaw in the mid-1st round which was a steal. He can provide a similar pass rush to DeForest Buckner, while not being as run dominant, but he fits perfectly on this D-line.

The Broncos were able to receive a high grade filling their need at WR without having to move by selecting the best WR in the draft in Jerry Jeudy. Jerry Jeudy has the route running skills of a NFL vet and should be able to contribute early and often whether he is the #1 or #2 WR; great value at this spot.

The Falcons went defense as expected selecting A.J. Terrell to be an upgrade at the CB spot after losing CB Desmond Trufant, while the pass rush appeared to be a more pressing issue with the losses in the front 7. Terrell should be able to contribute early and often, but their will be growing pains as a starter.

The Cowboys, like the Broncos, were able to receive a high grade thanks to the fall of the picks with the WR most scouts considered to be the best in the draft falling in their lap in CeeDee Lamb. Lamb gives the Cowboys a nightmare matchup in 3 WR sets and allows them to avoid paying Michael Gallup.

The Dolphins had the luxury of this draft by having 3 1st round picks to add talent to their team, but selecting Austin Jackson who was graded as a possible 1st rounder, this high, was a mistake with another pick left to use. Jackson has the potential and talent to be a starting LT, but there will be growing pains.

Like the Dolphins, the Raiders chose to fill a need too early, as Arnette was rated as a 2nd rounder at best on most boards. Arnette is a tall cover CB with good size and should be able to contribute after playing across from the top CB Jeff Okudah, but he needs to create more turnovers and will also have growing pains.

The Jaguars shockingly selected pass rusher K’Lavon Chaisson, which does make sense with them losing pass rush in DT/DE Calais Campbell, but while he slides into the OLB spot on paper, he still needs to learn the position and prove that he can stop the run, as well, expect there to be a learning curve.

The Eagles filled their need at WR selecting Jaelon Reagor, however the fans wanted Justin Jefferson, which seemed like a perfect fit, especially after seeing the Cowboys get Lamb. Reagor fills the need for speed on the team, which was obvious last season, but Reagor can contribute on both special teams and in the passing game.

The Vikings filled a need at WR after trading Stefon Diggs for this pick and others, selecting Justin Jefferson. Jefferson is a big-time playmaker with the swagger you like to see in a WR and he has #1 potential and good size which is needed next to Thielen who prefers to play in the slot.

The Chargers traded back into the 1st round to select Kenneth Murray and were able to get good value at this spot in the draft, while not giving up too much in return. Murray is a top 15 talent and the top MLB in the draft, which fills a need, as the Chargers have been trying to find a playmaker there for years.

The Saints surprisingly chose Cesar Ruiz who was ranked as the top Center in the draft, but the Saints already have one of the best O-lines and found a sleeper at Center last year, who they now plan to slide to Guard or vice versa. The Saints had other needs on the board, especially on the defensive side, and even would have been better served going with the best on the board, but this pick could pay off.

The 49ers moved up in the 1st round to select Aiyuk, a player I thought could add nicely to the teams above and below as a good playmaker in space with the ability to create matchup problems inside and outside. While the 49ers needed a #1 WR, Aiyuk does give them another playmaker at the position who fits the West Coast catch and run system.

Arguably the worst pick in the 1st round, as the Packers traded up to select a project in QB Jordan Love to sit behind Aaron Rodgers instead of finding a piece to help them get over the hump. Love looks the part of a big strong-armed passer with intangibles, but he needs to improve his awareness and accuracy.

The Seahawks did what they usually do in the draft and select the player that no one seen coming, this time, it was Jordyn Brooks. Brooks is a solid tackler and run-stuffer who uses his high motor to make plays behind the line of scrimmage. Brooks is a bit undersized and at this point fits more as a backup LB/special teamer; slightly high for this selection as he was graded as a 2nd rounder at best.

The Ravens did as Mel Kiper predicted and selected Patrick Queen with the #28 pick. The Ravens noted that they had their eye on a certain MLB and Queen seemed to fit the bill. Despite being undersized, Queen is a high motor player with a nose for the ball while using his speed as a sideline to sideline tackler. The Ravens have the beef on the D-line to protect him and specialize in gang tackling.

The Titans shocked most people taking Isaiah Wilson, as he was ranked as a high 2nd round prospect at best. However, I like the fit as the Titans loss run-mauling RT Jack Conklin and Wilson specializes in bullying people in the run game at the RT position. He will need to grow in pass protection, but the Titans love to play bully ball.

The Dolphins smartly traded down to acquire even more assets in the draft, but once again reached on a player who was rated as a 3rd rounder at best in Igbinoghene. Igbinoghene is an athletic former track runner and WR who converted to CB; however, he is a willing hitter and has good hands. He is extremely raw, and the Dolphins don’t really have a need here with two highly paid CBs, but he will play.

The Vikings also traded back acquiring more picks, while also filling a need at CB after losing their top 3, by selecting Jeff Gladney. Gladney is a physical CB with good size who plays aggressively and can play both inside and outside while being a good blitzer. Gladney is another 1st round CB by HC Mike Zimmer, so he should be able to utilize him perfectly.

The Chiefs went RB as I expected, but chose to go with Clyde Edwards-Helaire, who will be a perfect fit as a dominate receiver out of the backfield and explosive runner who bounces off and out of tackles. Edwards-Helaire gives them a more explosive version of Damien Williams to pair with him, despite being a bit undersized, Edwards-Helaire plays a lot bigger.